If all of life is one big game, playing to win makes perfect sense. Right? Money, success, titles, fun—whatever we’re chasing has to be worth the sacrifice and work. So what happens when you get the thing you want and it turns out life is the same as before? There has to be a better way to win. Let’s commit to searching.

If I’m not winning, I’m losing

Despite the participation trophies lovingly handed out to my children over the years, the real world doesn’t seem to value mere participation. In general, if I’m not winning, I’m losing and we value winners.

No matter how much we bemoan the underlying current of comparison and our unspoken competition, we choose to play the game. Doing great things and looking good while we do them is our mantra. (And I don’t mean looking good physically, although sometimes that’s the case as well.)

Think about a normal Sunday morning. Rushing leads to yelling. Outfits are critiqued, hair is coiffed, spirits are prepped. Between home and church, we transform from harried to holy. Showing up less than presentable is unaccepted. If Rachel can show up looking good with well-behaved children, so can we. Spoiler: she’s just as crazy as you.

Our jobs, our homes, our kids—everything reflects us. For better or worse, we define through comparison. As we get older and wiser, aren’t we also supposed to start valuing ourselves more and compare ourselves to others less?

None of us want to lose. We want to win and we want everything our way. What are we trying to achieve and what happens when we get there?

We choose the next game. I’m not saying it’s a good choice, we owe it to ourselves to be honest.

Playing the game and trying to win isn’t new. Often, scripture offers guidance about how to live. In this case, we’ll learn the opposite.

After years of infertility, Rebekah finally becomes pregnant with twins. Unbeknownst to her, her twin boys’ struggle within the womb was only a hint of the fight yet to come. “Two nations are in your womb…the older shall serve the younger.” Genesis 25:23

As the firstborn male in a family, you’re entitled to inherent honor and opportunities. Second place was the first loser, which is exactly where we find Jacob. With his mother’s support, he schemes until in an act of utter deceit he steals Esau’s blessing on his father’s deathbed.

He had his brother’s birthright and blessing, as well as his brother’s hatred. Instead of living well, he ran away to avoid his brother’s wrath. For decades, he avoided his homeland out of fear. He lied. He stole. No amount of wealth could erase his fear.

Eventually, he had to return home.

Upon his return, Esau hugged him and declined his peace offering by responding “I have enough.” (Genesis 33:9) Imagine those words coming from the person you deceived. What Jacob meant for harm, allowed room for God to work in Esau. Esau found a better way to win for his family.

A better way to win

Jacob was trying to win using the rules he understood. What if there is a better way to win, unlike anything we understand?

When the system is flawed, create a better way to win.

“Our father died in the wilderness… And he had no sons. Why should the name of our father be taken away from his clan because he had no son?” (Numbers 27:3-4) They have a point. And they’re bold. I like that about these women. “Moses brought their case before the Lord. And the Lord said to Moses, “The daughters of Zelophehad are right.” Numbers 27:5-7 (emphasis added)

God was already in the business of undermining the birthright debate—Abel, Isaac, Jacob. Why not make a drastic change to inheritance rights for women as well?

If the game you’re playing isn’t bringing you closer to God and his purpose for you, change the game.

Ask yourself these hard questions. Be honest. Put names and faces and feelings to your answers. You cannot make a change until you understand where you are.

How do you define personal success?

What are you chasing?

Our 2020 story isn’t over and we get to choose the ending. Get your free e-journal today. 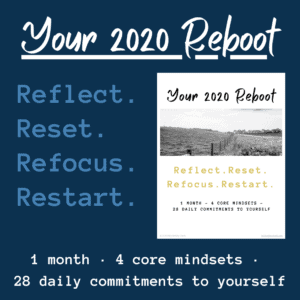