It’s happening again. Something isn’t right, you already have an idea how to solve the problem, and everyone else either hasn’t noticed yet or doesn’t care. What are you going to do this time—take a stand (again), even if you stand alone?  No one will be surprised if you do.

People, it’s not about control

Of course, she thought her views were right. Weeks of research, coupled with relationships formed over the last 10 years, backed her stance. The time had come to give her speech in front of others and wait for their reaction.

I was proud of my daughter for choosing a slightly controversial topic and sharing her convictions, knowing many others would not agree.

She wasn’t trying to stir up trouble or provoke a response; nor did she expect a drastic shift in opinion. She hoped to start a conversation about a current issue and offer up a different perspective. This particular issue is bigger than any one person can solve, but if no one starts the conversation it would be easy to ignore.

Strong women of any age delivering crisply worded messages are too often misunderstood.

People assume we’re troublemakers, out to take control and cease power. Of course, we’ll speak up and take a stand, we’re leaders. But, it’s not about control. Deep inside of us, restlessness stirs as we see the injustices of this world and our minds swirl with possible solutions.

We see problems and possible solutions. We are problem-solvers at heart. 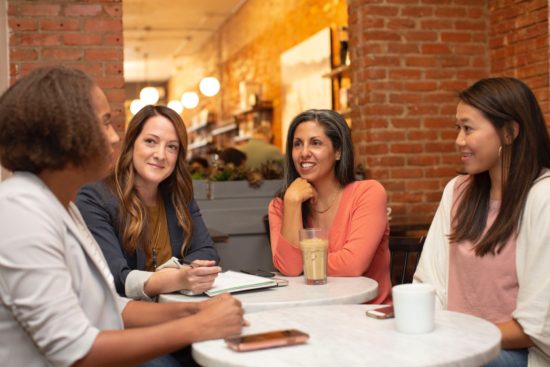 A place for strong women in the bible

God didn’t shy away from giving strong women prominent roles in the bible. Even in a patriarchal culture, he encourages women to use their strength, wisdom, and influence for his purposes.

Deborah lead the military into battle when Barak would not go alone. (Judges 4)
Esther foiled Haman’s plot to kill the Jewish people. (Esther 3-8)
The daughters of Zelophehad challenged the inheritance laws and won. (Numbers 27)
Priscilla and her husband taught Apollos the depth of the Gospel. (Acts 18)

These women weren’t searching for power or prestige, they were doing the work God laid before them. Although their stories are recorded in scripture, there are no doubt countless other impactful women whose names we wouldn’t recognize.

Being known for doing good is not bad. Using your voice and influence to shed light on injustice or spur others on to service is not wrong. Don’t let your anonymity hold you back. Having the courage to take a stand means just as much outside the spotlight. (If only we could ask the unnamed women who followed Jesus from Galilee to share their stories along with those of Mary Magdalene, Mary, and Salome.)

Take a Stand, Even If You Stand Alone

Whether you’re the one with the big ideas and restless soul or the one who’s slightly taken aback by the strong woman about to voice her opinion, we need to hear your words.

God didn’t ask any of those women to be silent. He created them for action. Their stories are so important, he directed them to be recorded for us to read now.

If you have thoughts and stirrings that won’t go away—take a stand, even if you stand alone.

Be the one who bravely speaks up for those who might not do so for themselves. God has given you a brilliant mind, a strong voice, and the Holy Spirit as a guide.

The time is now for you to take a stand.

And if you have the privilege of seeing a woman bravely following God’s calling in her life, you have an opportunity to encourage her. Trust me. She needs to be encouraged. Taking a stand is hard.

Our 2020 story isn’t over and we get to choose the ending. Get your free e-journal today.